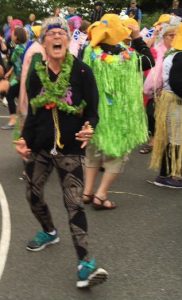 River Spirit launched their first dragon boat in 2003; however, the original idea for a breast-cancer-survivor team in Campbell River began almost two years earlier. While staying at Victoria’s Cancer Lodge undergoing treatment, Sally Feast and her roommate noticed a dragon boat team was starting in Nanaimo. They both wanted to join even though it would mean a long commute.  Luckily, by the time they were fit enough to paddle, Hope Afloat in Comox already had a team. Sally, together with Vicki Hansen, and Corrine Mergaert were the first Campbell River ladies who trained with Hope Afloat in 2002. In 2003 all three joined twenty other breast cancer survivors from Campbell River to form River Spirit.

Support in Campbell River for a local breast cancer team was nothing less than amazing back then. By May 2003 River Spirit had raised over $21,000, enough to buy a 6/16 dragon boat from Vancouver builder Vincent Lo. Even so, they still needed money for a boat trailer, lifejackets, paddles, insurance and T shirts. Many groups in the local community again gave their generous support and the Freshwater Marina offered the team free moorage. Sally, with her background as a fitness instructor and one season’s paddling experience became the tiller, coach, and lead motivator. A video of the first trip away from the dock shows a very enthusiastic yet inexperienced River Spirit crew struggling to keep control of the sixteen-metre dragon boat, yet after only a short time they were paddling confidently through the waves and enjoying the local scenery.

Since 2003 River Spirit has grown considerably and is well known all over the Island for its camaraderie and team spirit. All its members are active in the community and support one another through life’s changes. In 2012 the club bought a second dragon boat thanks to a generous donation from local businessman Alan Edie. River Spirit II is dedicated to his mother Lois Edie.